What happened to the Old Religion?

With a growing disillusionment in institutions like the traditional Church and its partner, the dishonest, corrupt US government and its lying media, it would seem that people would be more skeptical of any kind of belief system that didn’t offer any real evidence. How did this kind of paradox and parallel belief system come about and what are the implications for society as people seem to be looking in the strangest places for new gods? I believe first and foremost, it stems from the mistake of applying the term ‘belief’ to what is nothing but a scientific question.  In other words, it is not about believing at all, it is a question of – is there enough scientific evidence to confirm the existence – and that’s it. Yes or no.

As you watch and listen to Encounters USA videos and our podcasts, you will see a recurring theme. That theme is a continuing lie propagated by the government that there is no evidence, in spite of the fact there is plenty of evidence to establish the reality of extraterrestrials, UFO’s or UAP’s, Bigfoot and Dogman. Even with the admission of the US Navy in 2020 that there are exotic craft not from the earth, NASA and every other government agency continues to deny there is any evidence. The result of telling someone there is no harm in smoking cigarettes is that the messenger has little credibility when smokers die of cancer and emphysema en masse. At a time when there is a crises of faith and trust in what used to be the trusted order of the establishment, there is also one of the greatest psychological manipulations in modern history. In my book, Deceptions of the Ages: “Mormons” Freemasons and Extraterrestrials, I point out the manipulation of the UFO question and other “conspiracy” topics as a question of belief, rather than a simple question of yes or no based upon proven and substantiated data collected from eye witnesses and physical remnants of visitations. Rather than asking if people think there are UFO’s etc, it is always a question of belief. Asking if you believe in something is begging the question that there is no physical evidence available so you are resorted to believing, or the contrary. There is no question like, “Do you think there are UFO’s?” Because if you ask someone if they thought about something, it would mean they would have to consider what evidence is available. It is much easier to dismiss a nut who believes in UFO’s or Bigfoot or the Dogman than it is to dismiss someone who thinks these entities are real. That leaves us then with an indelible stamp left upon the communities of the Bigfoot or UFO researchers as believers in something the government wants you to believe is intangible like Santa Claus or the Great Pumpkin. Even the Bigfoot, Alien and Dogman communities themselves, either because of conditioning through corporate/government/media influence or possibly because they didn’t see anything wrong with riding the coat tails of the success of popular tv shows like the X Files, have adopted the theme of ‘believing’ in UFO’s or ‘Wanting to Believe’ in Bigfoot. The fact of the matter is, there is so much evidence through so many credible witness, researchers and physical remnants that the use of the word believe in relation to these subjects simply reinforces the corporate/government/ media position that there is no evidence to prove these things exist. At Encounters USA, we don’t believe in a Bigfoot, a Dogman or extraterrestrial civilizations. We have seen the evidence and we say there is something that needs a lot more investigation. It is our job at Encounters USA to bring the evidence that is out there to you, in the form of podcasts, videos, blogs, research and actual field investigations. We hope you will join us in our journey. Thank you for stopping by! Please support us by subscribing, sharing & buying something fun for yourself from our Encounters USA shop. P.S. For all of you Christians, there is good news. The US Government and our elected officials also deny the existence of God and the Divinity of Jesus Christ. Let’s watch and see how that works out for them! Don’t miss our next blog post! 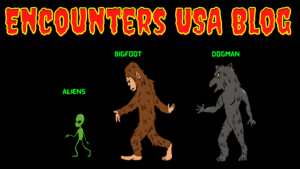